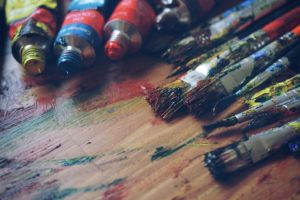 The phone was ringing.

Stephen knew it was ringing.

He also knew he didn’t want to answer it. Not now, probably not ever. He had all the company he needed, right here – his chisel, and this block of marble.

No. They could fuck off.

Defiantly he turned up the volume on his iPod until Morrissey’s plaintive vocals almost caused him physical pain, and set about the business of trying to set to work.

“Just shut your mouth…” he sang along, hoping to drown out the entire world.

“I go about things the…”

For fuck’s sake! When would they give up? His moments alone with his craft were becoming increasingly sparse; each one was a precious gift he couldn’t afford or bear to lose.

The phone fell silent. Stephen’s voice did, too. He didn’t need to be loved; not anymore. He had done, once, a long time ago. He had loved, and, he’d thought, been loved in return. But that door had closed, and Stephen knew it would never reopen for anyone else.

He closed his eyes. It was still there, her smile; haunting him, taunting him. He already knew that this block of marble would ultimately become her, just as so many others had before it. A blank canvas was never really that, not for him. Art, after all, was the product of the heart, and while her face was imprinted upon his, fresh inspiration would not, could not, come.

He picked up his chisel.

“Fuck you,” he said out loud, teeth clenched with suppressed passion, and hacked into the marble with a ferocity as tender as it was violent, banishing the outside world and all its itinerant horrors from his mind once more.

Stephen stared impassively into the cup. It was floral, he noted; and would not have possessed a single redeeming design feature had it not been for the interesting chip out of its rim, which when regarded from a certain angle bore a striking resemblance to the ear and trunk of an elephant in silhouette. He hadn’t wanted the tea. He didn’t want the tea. There it was, the offending liquid in a paler shade of tan than was his preference, steaming cheerfully away in its chintz prison. Tasteless tea, he thought, in a tasteless receptacle. Lovely.

“We never see you, do we? You’re always tucked away in the art block, aren’t you? It’s a proper treat for us when you pop in!”

Stephen’s eyes never left the tea, of which he found himself feeling strangely glad, providing him as it did with a socially acceptable focal point for his rising irritation. He’d only popped into the office to get the printouts of a letter he needed to send to the parents of his GCSE students. It should have been a simple please, thank you and goodbye. But nothing could be that simple, could it? The ominous belch of steam and click of the kettle had informed him before he was even fully through the door that he couldn’t possibly have timed his visit any worse. Before he was able to muster any form of self-defence he was being woman-handled by all three school secretaries (all of whom, he noted wryly, were of a larger frame than he) into a waiting swivel chair, and having the treacherous tea thrust forcibly into his reluctant hand.

If Sue, Elspeth and Irene were aware of his pain they didn’t show it. They loomed together over him, forming a kind of impenetrable cage that made Stephen feel uncomfortably like an animal in the zoo. He didn’t like zoos. As he stared resolutely at the insipid, steaming tea, he tried to fill his mind with the paintings of Henri Rousseau, of the wild jungles and vast plains he’d created where animals roamed majestically and as freely as they pleased.

“We’ve been thinking, Mr Freeman.” No, the cage was still there. “We think you’re looking a bit peaky lately.”

Stephen raised an eyebrow. It was as enthusiastic a gesture as he could muster at the present moment.

He tried his best not to make it sound like a question. Questions, after all, invited answers, and had a horrible habit of making people think you actually wanted to converse. However uninterested his inflection, however, the secretary-wall was determined to press the issue.

“Yes,” came the unsolicited reply from another part of the solid structure. “We think it’s a shame, you know. You don’t get out enough. You must be lonely.”

Why do people insist on doing this? Stephen wondered, fighting the natural urge to look up. Just because they can’t get any dirt on you, they assume there’s nothing to know. Does it make them feel better about the incessant dullness of their own lives?

Elspeth, the largest and most central of the three, leaned a little further forward.

“But you’re not getting any younger, Mr Freeman.” Yeah, thanks for that. “And we think it’d be nice for you to get out more. You know, maybe meet a young lady. Someone to cuddle.”

Right now, Stephen mused cynically, cuddling was the furthest thought from his mind. Strangulation was a far more realistic possibility.

“Someone to look after you,” Sue butted in. “It can’t be easy on your own.”

She thrust a glossy leaflet into Stephen’s hand. The light caught it as she did so, highlighting the large, greasy fingerprints on its surface. How inviting. Idly he regarded the unwelcome gift, wondering when would be the appropriate moment to aim it at the nearest bin and make a run for it.

“We picked this up for you,” Irene said by way of explanation. “Thought you might be interested. You know, you really don’t get involved enough with the community round here. And with this being art and all, we thought it might be up your street. What do you think?”

Slowly Stephen raised his eyes, to be met by three hopeful faces leering at him, doubtlessly in search of praise and gratitude.

“I’ll think about it,” he said, his eyes darting from one to the other then back to the untouched tea, which he deposited on the nearest surface before struggling to his feet. “Thank you. I have to go now.”

He could practically hear the tutting and shaking of heads as he placed his letters and the offending leaflet in his bag and left the room without looking back.

Stephen didn’t think he was rude. It wasn’t his intention. He was just introspective, and, like many artists, obsessively private. He didn’t see it as part of his human duty to interact extensively with the rest of the species. He didn’t see anything wrong with preferring the company of paints and tools and stone. They understood him. The rest of the world, it seemed, never would. Especially not school secretaries, or even worse; teenagers.

How had it come to this? he wondered to himself as he regarded his Year 10 group through half-focused eyes. He’d never had any ambition to become a teacher in his youth. All those fresh young minds and imparting knowledge and inspiring the next generation, noble as it was, had held no interest for him whatsoever. He was an artist. An artisan. And he was going to be the next big thing. His sculpture lecturer at college had even gone so far as to tell him that. But it hadn’t happened; Laura had happened instead. And no amount of thanks from aspiring young artists, even had it not been so scant as it was at the best of times, would ever make that OK.